MGH Institute of Health Professions was founded to address the need for master clinicians - leaders in the healthcare professions molded by the integration of theory and clinical practice in an interprofessional environment.

Since many healthcare professions evolved from hospital-based needs, the MGH Institute’s educational programs initially developed through on-site clinical training activities. The shift from hospital-based to college and university-based education for health sciences raised several issues, including lack of integration between clinical and didactic aspects of healthcare curriculum.

In 1964, Ruth Sleeper, Director of the Massachusetts General Hospital School of Nursing from 1946 to 1966, recognized the implications of these changes in nursing education and promoted the idea of a free-standing, degree-granting institution affiliated with the hospital.

In the early 1970s, Dr. Charles A. Sanders, Dr. Knowles’ successor, along with Dr. Henry Mankin, Chair of the MGH Committee on Teaching and Education, and John E. Lawrence, Chair of the MGH Board of Trustees, pursued the idea of creating an affiliated graduate degree school.

In 1975, a petition to grant degrees was submitted to the Massachusetts Board of Higher Education. A public hearing was held, at which local colleges and universities voiced opposition to establishing a free-standing school governed by the hospital. But in 1977, MGH was awarded degree-granting authority by the Commonwealth of Massachusetts. The first Provost (school leader), as well as program directors in dietetics, nursing, physical therapy, and social work, were hired.

In 1983, the first degree, a Master of Science in Physical Therapy, was awarded, and a new Master of Speech-Language Pathology program began.

Throughout the 1980s and early 1990s, the MGH Institute continued to grow and change. A faculty award for excellence in teaching was established and later named in honor of Nancy T. Watts, Professor Emerita, a nationally prominent physical therapist and educator who was instrumental in the Institute’s founding. The nursing program achieved specialized accreditation, the social work program closed, and students enrolled in the speech-language pathology program which was renamed Communication Sciences and Disorders. The Institute also moved from Massachusetts General Hospital into 101 Merrimac Street near North Station– the first time faculty, staff and students were together under one roof.

By 1994, when Partners HealthCare was formed by the Massachusetts General Hospital and Brigham and Women’s Hospital, the MGH Institute’s enrollment had reached 500 students. The following year, the entry-level Master of Physical Therapy program began, the dietetics program closed, and the nursing program revised its curriculum to prepare nurse practitioners.

In 1996, the speech-language pathology program was awarded teacher certification by the Massachusetts Department of Education. 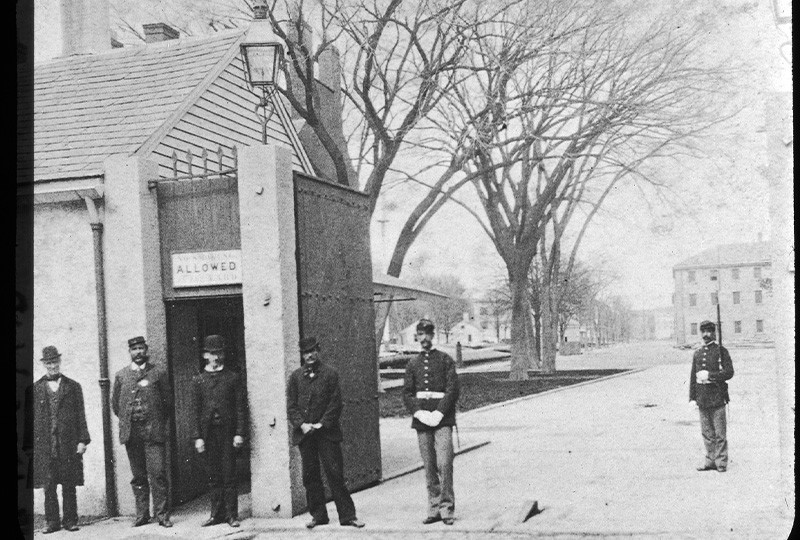 Building 36 was built in 1866, just after the Civil War. It is a notable example of the Boston 'granite style'. The brick and granite-faced structure served as the joiners (carpenter's) shop and painter's loft from 1867 to 1921. From 1922 to 1927 it was a furniture store house and mold loft and then served as the Naval Reserve Headquarters until 1935.

2000: The Institute purchased Building 36, a former joiners building in the Charlestown Navy Yard. Named the Catherine Filene Shouse Building, after the generous support from the Shouse Foundation, it was renovated into a state-of-the-art educational facility that opened in December 2001.

2004: First students are enrolled in the Post-Baccalaureate Certificate in Medical Imaging.

2005: The first Distinguished Alumni Award was presented at the 25th Commencement, while alumnae from the MGH Nurse's Alumnae Association began a yearly tradition of carrying the flag of the Massachusetts General Hospital nursing school to symbolize the historical link between it and the MGH Institute's School of Nursing.

2007: Accelerated Bachelor of Science in Nursing and Doctor of Nursing Practice programs are launched.

The Institute held its first annual Gala to generate additional scholarship funds to support students attending the school. That same year, Janis P. Bellack, PhD, RN, FAAN, was named the Institute's fifth president. Under her leadership, the school began an unprecedented growth in programs, students, and facilities that continues to this day.

2009: Graduate programs in nursing were designated as a new School of Nursing to better reflect the size and scope of its academic offerings. The speech-language pathology, physical therapy, and medical imaging programs were reorganized under the umbrella of a new School of Health and Rehabilitation Sciences, and the clinical investigation program closed.

2011: The New England Association of Schools and Colleges re-accredited the Institute for another 10 years. The Center for Interprofessional Studies and Innovation was created to foster entrepreneurial activity, innovation, and collaboration between faculty and students in the Institute’s academic disciplines. Enrollment exceeded 1,100 for the first time, while the number of alumni passed the 4,000 mark.

2012: The Institute expanded into a fourth building adjacent to the U.S.S. constitution, better known as Old Ironsides. The School of Nursing added a second admission cycle to the BSN program to meet rising demand, while the first cohort of students enrolled in a new PhD in Rehabilitation Sciences program. The school also began a Master of Science in Health Professions Education program, and the medical imaging program closed.

2014: First students are enrolled in New England's first entry-level Doctor of Occupational Therapy program, while the School of Nursing programs and the Doctor of Physical Therapy program were each re-accredited for another 10 years. The school added 14,000 square feet - creating a new Center for Health & Rehabilitation Research to accommodate faculty researchers leading the Institute's growing focus on research, with research funding surpassing $2 million for the first time in its history.

2015: The Institute expanded into its seventh building, creating a new Library and Study Commons, thereby increasing its footprint to nearly 140,00 square feet - almost triple the amount of campus space since 2007. Research funding grew to $4 million, while the first students enrolled in a new Master of Physician Assistant Studies program. In spring 2015, enrollment surpassed 1,500 students.

2019: The school launches three new degrees: a PhD in Health Professions Education, a Master of Science in Genetic Counseling, and a post-professional Doctor of Occupational Therapy. The school created a new Office of Diversity, Equity, and Inclusion and hired its first director. A student was chosen to deliver the keynote address at Commencement for the first time in school’s 42-year history.

March 2020: The IHP shifted to a fully remote operation in response to the coronavirus pandemic. Classroom and hands-on education pivoted to virtual platforms during the largest health crisis in a century. A series of innovations allowed most students to graduate on time, while the 40th Commencement ceremony was moved from May to August and changed to a virtual event to accommodate shifting health restrictions.

2021: The IHP community returned to campus albeit with masks and other safeguards, as the COVID-19 pandemic began to subside although Commencement again was held virtually. The school launched New England’s first clinical Doctor of Speech-Language Pathology program, and the total grant portfolio passed the $25 million mark for the first time in its history.

Take the next step