Our students (and alums) are beyond fantastic.  We all know that.  They are highly recruited, so smart, and destined to be leaders.   Today, I want to take a moment and to recognize a few members of our community, who have demonstrated exemplary leadership through their participation in this year's Boston Marathon.  I admire their effort so much and believe they have hit a "home run" for themselves and for the Institute.  See what you think:

Home Run Number 1: First off, CSD 2007 alum, Janis Greim decided to combine her passion for running and her commitment to the IHP into a remarkable memorial for her classmate, Chris Norman, (CSD 2007), who passed away suddenly last year.   Janis, who now lives in Pennsylvania, and works as a speech-language pathologist for a rehabilitation agency, entered the Boston Marathon with a goal of raising funds in memory of Chris.  When the Norman family heard of this, they developed a matching challenge to inspire Janis' classmates, faculty, and others to make a donation.  At the end of the 26 mile run, Janis' leadership inspired over $15,000 of commitment for future students in CSD!   Janis, now back at home, sent a wonderful message yesterday, and in it she said :    ..." But running is really the pinnacle of the sport, it decides who wins and tests you when you’re at your most vulnerable point in the race.  More than that though, by itself, running is such an innately natural part of who we are as humans. And it occurred to me, Chris taught me that. He taught me about running. It has become such a powerful medium for expression. People run out of anger, fear, pain, boredom, joy, excitement, worry, love. . . Running is colorful, just like Chris. That’s why I think he was drawn to it. So at the end of the day, I think I’m lucky for having gone through all of this. I got to learn something about Chris and something about myself.

I had no idea what would happen on Monday. I went into the race reminding myself that in all my 28 years, I’d never started a race that I didn’t finish - this would not be the first. I ran slow and steady and did it with a killer smile, because that’s what I remember most about Chris."
Home Run Number 2:  Kailin Collins, a second year student in the DPT program decided that with school and clinical responsibilities that she could run in the marathon and raise money for the PT Center!   The faculty describe Kailin as a leader and clearly she is a great time manager, as well.  Training for the marathon, combined with her other responsibilities is an amazing commitment.   And the best  news, Kailin came in 36th in the women's division with 2:48:39 time, which is just 2 minutes shy of an Olympic trial qualifying time!   She says that ....
"the trek from Hopkinton to Boston was an indescribable journey for me and there so many faculty, family, and classmates cheering along the way!"   She went on..."
"Throughout the race I was cognizant that I was representing the IHP...... I have had the privilege of working (in PT) with clients from the Aphasia Center and I was amazed by their fortitude and will."
Kailin's fortitude and will raised over $5000 for the PT Center at the Institute. 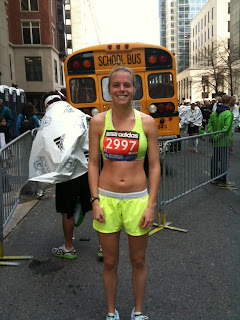 PT Student Kailin Collins at the finish line!
Home Run Number 3:  Kelly Brush is a first year student in the Direct Entry (MSN) Nursing program.  Kelly brought distinction to herself and to the Institute by completing the course in under two hours......oh by the way...she came in first place (YES, FIRST PLACE) in the handcycle division of the marathon.   If you want to learn more about Kelly and her commitment to athletics and to other people with spinal cord injury, you may want to spend some time on her website: .  http://kellybrushfoundation.org/ .  Trust me, it is worth the time to learn of the drive and inspiration that Kelly brings to the Institute and to her racing!    Kelly described her participation in this year's Boston marathon as follows:  "The marathon was great, a lot of fun. I went much faster than I was expecting, which was exciting. It was such a great experience being on the course with all of the fans and hearing everyone cheering for me. I did my first marathon last spring in Burlington, Vermont (where I'm from) and qualified for Boston. I decided that since I'm living here and I qualified and it's such a great event I should do it. It was hard to train since it's winter in Boston and I can't ride my handcycle (what I used in the marathon) in the snow, but I obviously found a way to train enough to win my division! I was not expecting to win, but it was a pleasant surprise!
Home Run Number 4:  And then there is our DNP student, Ann Marie Larocca.  Ann Marie is one of the nurse leaders at Spaulding Rehabilitation Hospital, for which she raised money during this year's marathon.  So, imagine  juggling a demanding "more than"  full time job at Spaulding, participation in a doctoral program after hours and on weekends and training for a marathon.
She describes her experience, as follows:

"I started off feeling strong, but at about mile 14 I hit a bad patch mentally and started to doubt my ability to finish. I was actually looking around for the next Red Cross station and thinking no shame, no blame, just take the bus back to the Mandarin. Then something just kicked in. There were no angelic voices, no super burst of speed, I just started thinking about the Spaulding tagline "find your strength" . Focusing on finding my strength helped me turn it around, kept me off the bus and after 6 plus hours on the course led me to the finish line. "

So, four home runs from the IHP community!  I encourage you to send each of our marathoners your congratulations!
Posted by
Alex
Johnson

Dr. Alex Johnson is Provost and Vice President at the MGH Institute of Health Professions in Boston, MA. As the provost he serves as the chief academic officer, having responsibility for all of the academic programs, the faculty, and the students at the Institute.

He is also Professor in... END_OF_DOCUMENT_TOKEN_TO_BE_REPLACED